With Skagway in our rearview mirror, we began in earnest our return to the Lower 48.  Four days of drives and stops in places with names like Tetlin Junction YT, Nugget City YT, Dease Lake BC and Stewart BC, you know that we were still a long way from civilization and only about ½ way down British Columbia!  In Stewart we spent 2 nights before continuing our trek so we could visit Hyder, AK (more below) and then proceeded with stops in Smithers BC, Prince George BC and Kamloops BC before our final stop in Anacortes, WA.  This route had us retrace our steps on the South Klondike Hwy and part of the Alcan before turning south on the Cassiar Hwy, then east on the Yellowhead Hwy and southwest on the Coquihalla Hwy.  Sounds like a lot of zig zagging, but remember there are very few roads in these parts as there are very few people or towns.  In fact, Prince George was our first taste of civilization with a population exceeding 70,000!

Our stay in Stewart BC allowed us time to step into Alaska for one last visit to a place called Hyder.   This is Alaska’s easternmost “town” but its close border with Stewart BC makes it seem like it should belong to Canada and not the US.  There is no border crossing from Stewart BC going into Hyder but to get back into Stewart BC you must stop.  Its 87 residents are so far removed from the reaches of the US government, that they pay no property taxes, have no police force, carry firearms openly and transact business with Canadian currency.  They rely on Stewart for their electricity, groceries, and assorted other services, but trust me on this, Stewart doesn’t have a whole lot to offer in that regard either! Needless to say, like we have found throughout this journey, the people who call this place home are those with a spirit of adventure and a certain distaste for the amenities we take for granted.

This all being said probably has you scratching your heads and asking “then why did you stop there”?  Well, it’s called the Fish Creek Bear Viewing Area, a site managed by the US Forest Service that allows you to walk on a raised boardwalk along the banks of the Salmon River to watch whatever bear might wander into the area searching out a tasty dinner.  Fortunately for us, the salmon had begun spawning on this river so the evening we went we were rewarded with one bear viewing.  And what a viewing it was!  Coming out of the woods at one end of the boardwalk and walking in the river just below, a grizzly meandered the entire length of the viewing area catching and then eating not one, but two fish!

The video I am posting was taken with my phone so you can appreciate how close we were.  Watching him eat and hearing the tearing of the fish as he worked at it is not for the squeamish, but was quite a sight to witness and well worth the gazillion mosquito bites we were still scratching days later!

Heading out of Stewart we drove through misty mountains with glaciers before encountering our first taste of smoke filled skies from the fires raging in British Columbia. 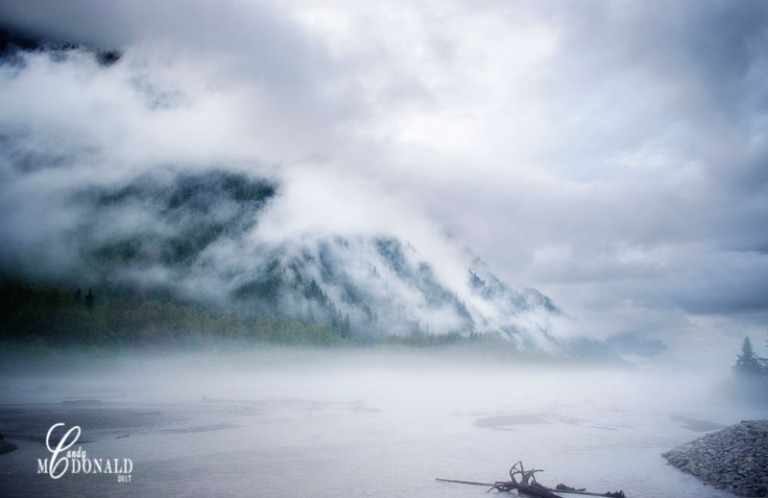 Limiting views of what would have been lovely scenery, we were saddened to think of the damage these fires were inflicting still hundreds of miles away.  Also as a result of the fires, our itinerary changed for our last night in Canada and required a long detour around the affected area and our night in Kamloops.

The original campground we were to stay in was located on a road that was closed and in an area where many had been evacuated.  So while disappointing, the tour company found us a decent campground in Kamloops and provided us dinner for the trouble.  The drive out of Kamloops to the US border on the Coquihalla had a lot of grades for the RV to struggle through, but it was a lovely drive and out of the smoke. 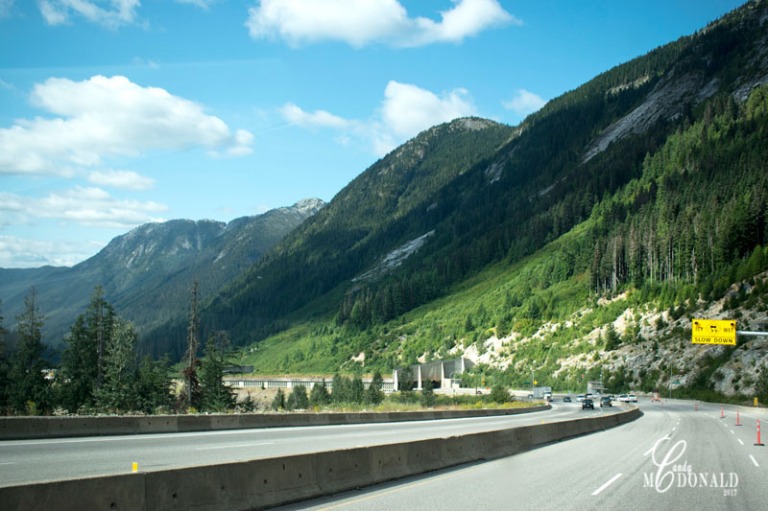 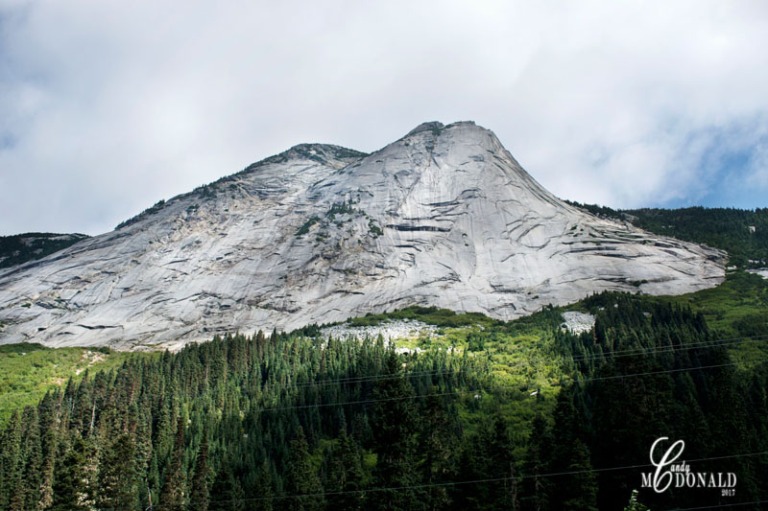 Our last border crossing for this trip occurred in Sumas, WA and was the easiest crossing yet!   The agent looked at our passports, asked us no questions and waved us through – guess we were lucky as two in our group got pulled and were asked to leave their rigs as agents went through them.  In their search, one box of cherry tomatoes was confiscated – phew, glad America was kept safe from Canadian tomatoes!!

Arriving in our final tour stop of Anacortes, WA we settled into a lovely campsite amidst the trees for two nights.  While here we did some brief sight-seeing of Fidalgo Island and enjoyed a farewell dinner on the last night of our stay.

Traveling 60 days and 5,976 miles with the same group of people especially on some of the crazy roads we encountered built quite a comradery among us.  With promises of a reunion meeting and “see you down the road” replacing the word goodbye, we each headed off in separate directions for the first time in two months. Just a bit bittersweet…

5 thoughts on “Alaska, goodbye for now…”