“In every walk with nature, one receives far more than he seeks.”  John Muir

Since my last post 2 weeks ago, we have navigated traffic through LA to end our jaunt on I-10, driven north on I-5 through California and Oregon and arrived in Seattle that will be home until mid-September. We have gone from weather that required the RV’s AC to run almost round the clock to weather that has required us to use our space heater in the mornings to burn off the chill. From desert landscapes to Pacific Northwest lushness – ah, the beauty of a road trip!

Art’s version: The desert is behind us, well except for the dust we tracked in over the past 4 days! Today was an epic day, yes epic. Today we reached the westernmost terminus of our interstate 10 journey. Eleven days ago (we don’t rush) we took the on-ramp west in Baldwin, FL, a tiny dot on the map about 20 miles west of Jacksonville. The rig’s odometer reads 88,692; was 35,000 when we left…ah, no that can’t be right? Try 85,790, that’s 2,902, all on interstate 10 give or take. Interestingly, 2902 was also the high temperature yesterday in Palm Springs, ha! Still can’t believe I chose this route in August but, hey, we survived and visited some great American towns that were on the “bucket list”.

First off, the choice to drive through the LA basin on a Sunday morning was a stroke of genius. Still plenty of traffic, of course, and one accident that tied us up about 15 minutes, but nothing that we have not encountered before. Apart from the appalling road conditions through the basin and up I-5 to Sacramento, our journey through the state was relatively painless.

Art’s version: Thought I’d say a few things about the roads in southern California. One might assume they’d be in good shape, right? No snow plows, no frost to cause problems and not much rain so poor drainage wouldn’t be an issue. Seems like an ideal place for good solid smooth roads, right? Now they have a road for every man, woman, and child out here but why can’t they make one with a smooth surface? Just one, why? I drove the 210 through San Fernando, a brand new 8 lane beast made of the whitest concrete. Beautifully crafted overpasses with plants adorning the sides, wide on and off ramps, etc. It was pretty. So why is it that EVERY expansion joint is 6 inches wide and 3 inches higher or lower than the adjoining slab? Too busy with the aesthetics, I guess.

We enjoyed driving through the Central Valley region of CA and seeing the variety of crops and groves growing on its irrigated land. I do wish they put signage on the roadside to tell me what was specifically growing – hard to determine for a non-farmer going 65mph down the highway! But, I suppose, that’s the least of their worries. The olive grove in the pictures below was next to a rest area so I was able to investigate more closely.

Art’s version: Leaving 210, I make my way north on I-5. Lots of trucks, I get it, but I don’t think the right lane has ever been resurfaced. The ruts were 12 inches deep in places, to change lanes you needed to downshift for the power to come out of them. And the potholes were so severe I actually saw Roma tomatoes fly out of the farm transport truck carrying them! Don’t expect to be impressed with the rest areas along I-5 either, built in the 60’s and still there. Not a big deal I guess but you’d think that for a state that intends to spend ½ trillion dollars this year they could throw a few million towards updating the urinals along the highways. California has the highest gasoline and transportation taxes in the United States, I think they spend it on all those “Your tax dollars at work” signs you see just before your left front tire disappears down another rut… 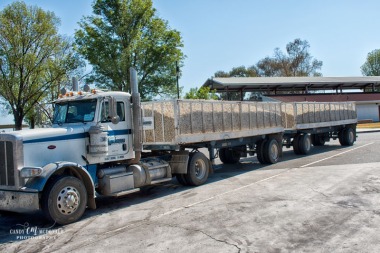 That’s a lot of tomatoes!

Once past Redding, CA we encountered the only major grade of our trip through the Shasta-Trinity National Forest and fortunately, the RV handled it like a champ. It was a lovely ride offering beautiful views of not only the forest but of Mt. Shasta itself.

Art’s version: Backup camera went out. It was old and couldn’t handle the jarring one more day. I’ll replace it when I get to Seattle. You know how when you cut your finger and you have to figure out a different way to use your hand? Well, that’s how it feels driving without a backup camera. Sure you can do it but, damn it’s hard. It takes getting used to, I still instinctively look at the blank screen every time I change lanes. Funniest part is wondering 100 times a day if the Kia is still attached.

Once in Oregon, we spent 3 nights in the town of Rogue River which is just outside of Grants Pass. Our stay here allowed us to take 2 ambitious day trips – one to the Jedediah Smith Redwoods State Park and Crescent City, CA and the other to Crater Lake NP. I say ambitious because the round-trip to the redwoods was 180 miles on a two lane winding mountain road and the other was a 120 mile round-trip the next day. But, it was surely worth the ventures as we stood among giants in the redwoods, walked the shores of the Pacific, and looked into the bluest waters imaginable at Crater Lake.

This state park covers 10,000 acres and is California’s northernmost stand of redwood groves. Our focused attention was on Stout Grove that thrives along the banks of the Smith River. Because flood waters prevent the growth of other understory trees in this grove there is nothing to interfere with the view of the 300 foot trees rising into the sky. Redwood trees can reach heights in excess of 350 feet (think 35 story building) and a width of 22 feet. They can live for up to 2,000 years though the average is about 600. The north coast of California is the only location in the world that provides the perfect environment for these giants to grow. It is an awe inspiring place…

The unpaved Howland Hill Road through the redwoods state park leads you out to Crescent City, CA which was our access point to the Pacific. This small town just 20 miles south of the Oregon border offers beautiful views of the Pacific’s rocky coast line, the state’s northernmost lighthouse, and the headquarters for the Redwood National Park. (It also offered a tasty fish and chips lunch at a restaurant overlooking its harbor!)

After spending the prior day at sea-level we traveled to higher elevations to visit Crater Lake which sits at 7,000 feet. Formed by a volcano that occurred almost 8,000 years ago the lake at 1,949 feet deep is the deepest lake in the United States. With no rivers or streams feeding the volcano’s caldera it has filled over the eons with rain and snowmelt. Why is it so amazingly blue?! Because of its depth and clarity, sunlight is able to penetrate deep into the water. The depth absorbs the red light of the spectrum but not the blue or violet which is then dispersed and reflected back to us. Whatever the science, it is incredible!

4 thoughts on “Trekking up the West Coast…”