Breaking camp in Leavenworth, IN was done hastily as the weather turned threatening. With dark clouds over us and the wind whipping up, we headed out keeping our eyes on the skies.

Fortunately with the front moving east and us heading west, we escaped the brunt of the weather and within 45 minutes we were driving under a bright hazy sky.

Once out of IN, we entered IL setting our sights for the Gateway City, St. Louis. Illinois exemplifies America’s heartland – farms, corn, more farms and more corn, but it is flat and easy driving.

As we approached St. Louis we wisely determined to take the bypass roads around the city instead of the route Good Sam’s plotted for us straight through. This allowed us only a brief glimpse of the arch on the horizon but the traffic headache it saved was well worth it!

We found our campground easily in St. Peters, MO about ½ hour NW of the city. It is flat with no trees but offers full hookups, nice shower facilities and picnic pavilions. Once set up, we hibernated in the air-conditioned RV to escape the assault of the heat wave currently blanketing the area. Had an early night in anticipation of our day in St. Louis tomorrow.

On day 4, we were up and out by 8:45 to make our 10:05 ticket time for the tram ride to the top of the Gateway Arch. This was our first outing away from the campground since our journey began and we were excited for the opportunity to tour the city. Navigating downtown St. Louis to the Arch was a bit challenging between road construction, one way streets and very little signage, but we found our way to a parking deck about 2 blocks from the entrance. Hoping that an early start would spare us heat stroke, it was disappointing to see that at 9:30 am the temperature was already 89 miserable degrees! By the time we made it inside the arch (circuitously because its grounds are under major renovation), we were, as my mom used to say, “melting and running down into our shoes”!

The Gateway Arch is operated by the National Park Service and their website provides excellent information about its history and construction. One point that I will mention; the arch at 630’ high makes it the largest monument in the USA. That’s 75’ taller than the Washington Monument and twice as tall as the Statue of Liberty. Impressive! 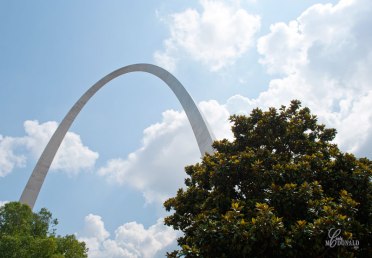 Security at the arch is similar to an airport minus the removal of our shoes, but the line moved quickly. Once inside we were assigned “tram capsule” numbers and then led to a room where we stood in front of a door with our corresponding number to wait for our ride to the top. As you can see in the picture,

the door is pretty small – the only part that opens is the 2’ x 4’ designed section in the middle. Needless to say, a door this size opens into a capsule that is just plain tiny. Supposedly enough space for 5, at least 2 of those would have to be children! It operates as part elevator, part Ferris-wheel to accommodate the curve in the arch and takes 4 minutes to make the ride to the top. I do admit that I was a bit apprehensive about the experience but it proved to be a piece of cake! Once at the top you are free to move about and take in the vistas from any of the 32 (16 on each side) 7”x27” windows. West facing portals offer spectacular city views while the east side looks upon the Mississippi River and Illinois. 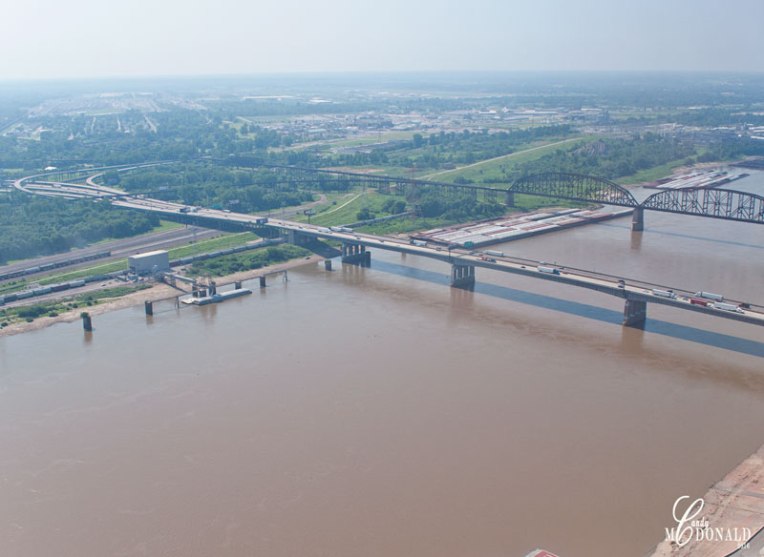 After leaving the Arch, we made a brief stop at the Old Courthouse where the Dred Scott case for emancipation was heard in 1857. Art found this particular piece of case law interesting and quickly decided to educate himself further. Seems the 14th amendment was still a few years off. 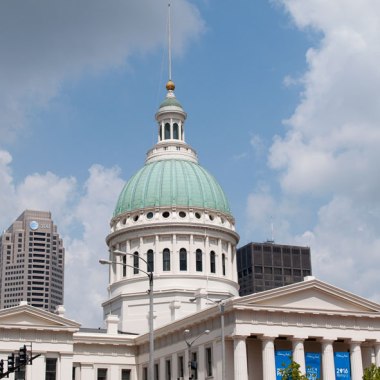 From there we returned to our car for a self-guided tour of the city. We were able to take in Busch Stadium, Anheuser Busch Brewing and the Soulard District before the heavens opened up cutting our tour short. We did drive through Tower Grove Park as we headed back to the highway and were sorely disappointed not to be able to get out and capture some of its beauty. Larger than New York’s Central Park, it is adorned with mature trees, lovely gazebos and fountains, and plenty of walking trails. Though our time in the city was brief we enjoyed its vibrancy, architecture and history. Maybe future journeys will allow for a longer stay.

Before I close this day’s chapter, I would be remiss if I failed to mention the severe weather that moved over us that evening. Huddling in the RV with weather warnings scrolling across the TV screen, frightening radar on our phones and apocalyptic clouds rolling in, we considered our options for cover. Thankfully, the worst of the storm passed to our east but we still experienced wind gusts up to 47mph rocking the RV, a spectacular lightning show and torrential rain. In a word scary and a rather memorable end to our stay in St. Louis!