In every walk with nature one receives far more than he seeks.   ~John Muir~

Prosser, WA to Enterprise, OR

Views Along the Road

A couple of years ago, I read an article in a magazine about the Wallowa Mountains located in the northeast corner of Oregon. It piqued my interest because I’m always looking for new sites to investigate in our annual trek to Seattle AND because it contained the word “mountains”! So, when planning this year’s itinerary I figured it was time to do some investigating of what some call “Little Switzerland”. Considered one of Oregon’s best kept secrets this area is fairly remote with limited roads accessing it. We chose to use the Hells Canyon Scenic Byway as our route and were not disappointed.

Leaving the interstate at LaGrande, we picked up the byway and drove approximately 65 miles to our stop in Enterprise. A well-maintained two lane road wound us through miles of farm land and into canyons where we followed the fast moving waters of the Wallowa River. On the other side of the canyon, the Wallowa Valley opens up before you with the mountains rimming one side. Nineteen of their peaks rise above 9,000 feet and while I think calling them “Little Switzerland” is a stretch, they were certainly beautiful. It was quite a cloudy day and threatening rain when we arrived, but fortunately no clouds hung low enough to obscure the view.

Farmland views along  the byway

Once we had set up camp and eaten lunch we headed out to see Wallowa Lake State Park in the hopes of beating the forecasted rain. Only 12 miles from our campground we passed through the charming little town of Joseph before arriving at the state park that sits on the shore of this lake. Being post season and a cold dreary day, we had the place pretty much to ourselves, which was great until we saw signs warning of bear! Would have been nice not to be the only choice of food on the menu if one showed up! Undeterred, we walked around a bit exploring the beach, enjoying the pine forested shoreline, and snapping pictures of the beauty (all the while making plenty of noise). Satisfied with our exploration we headed back to our RV’s to warm up and relax a bit before dinner just beating the first line of rain. Later that evening an approaching cold front passed through bringing high winds and more rain lasting into the wee hours of the next morning. We were happy not to have been caught driving in this weather and for the warmth of the RV against the 31 degree low that night! BRR!!

The next day dawned crystal clear and we were happy to see the blue skies that would allow clear views for the day’s planned drive to the Hells Canyon Overlook approximately 60 miles further down the byway. With lunches packed we hopped in the Kia by 10:00 am and began our journey. Hells Canyon is located along the eastern borders of Washington and Oregon and the western border of Idaho. It is the deepest gorge in North America (yes, deeper even than the Grand Canyon) carved over the eons by the Snake River. It offers many recreational activities mostly geared around the Snake River which is the only means to enter the canyon itself. The overlook offers views of the canyon but not of the river. 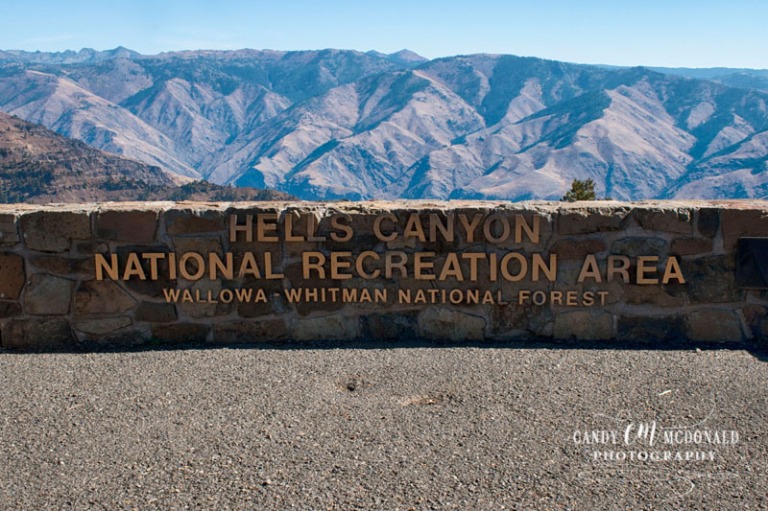 The road leading to the overlook is a narrow winding road up heavily forested canyon walls. Some of the cliffs are very sheer drop-offs and with no guard rails, I hugged the center of the road most of the way! I mean a good sneeze could send you plummeting to your death! But it was very lovely and apart from the sweaty palms we made it to the top (and back down again) unscathed! The view from the top was quite expansive and we did our best to enjoy our time there despite the cold and wind!

Originally planning to eat our lunch there we opted instead to drive back down in elevation to a lovely spot on the Imnaha River. We walked a bit along the river enjoying the sound, the fall colors, and the clear waters. Even Sadie enjoyed it – dipping her feet in and sampling its bracingly cold water!

One side note we found amusing, albeit a bit perplexing, is that this area is considered “open range”. In essence what that means is that ranchers do not have to fence in their livestock. In fact, the onus is on you if you live in this area to build your own fence to keep THEIR livestock out of YOUR yard! And even more amazing is that if you kill one of their cattle that has wandered onto the road, you not only have to notify the police, but you have to reimburse the rancher for the cow AND pay for any of the damage to your vehicle. I bring all of this up only because while driving through this national forest we saw not one deer, elk, bear, or any other creature considered wildlife but we saw two small groups of cattle. One group was just on the other side of the guardrail hugging a cliff. How do these ranchers round these roamers up? Still scratching our heads on that one…

Once back on level terrain we made our way to Joseph to do a quick tour of Main Street. While Art enjoyed a craft beer at a local pub, Caryn and I explored some of its shops. Again, this was after season so many of the shops were closed but the few we stopped into offered a wide array of items ranging from the rarely seen candy cigarettes to the more common succulent plantings. The town is also known for its art scene and there were galleries displaying the works of local artists and wonderful bronze sculptures adorning almost every intersection. 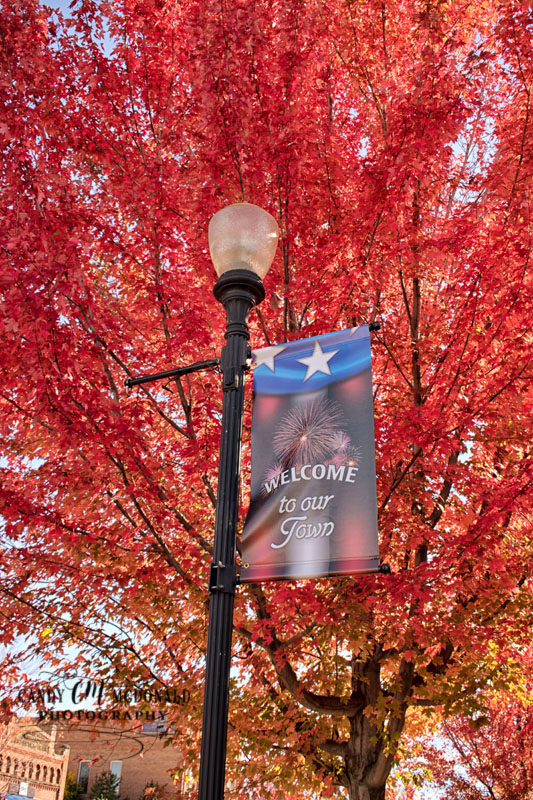 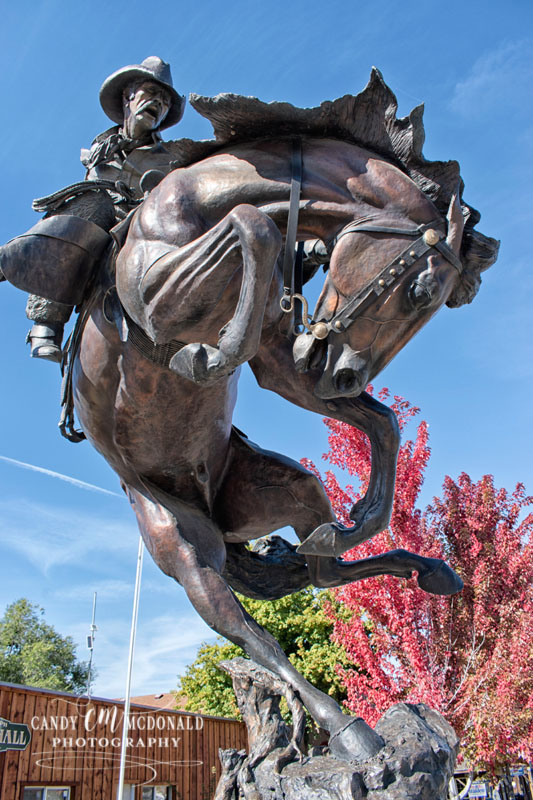 Joseph is named after Chief Joseph who was the leader of the Nez Perce that called this area home. As it seems with all stories involving the Native Americans and the white men, this one ends badly for the Native American. Once gold was found in the mountains in the late 1800’s, the earlier treaty made with this band of Nez Perce guaranteeing them 6 million acres of land was revoked and the Nez Perce were restricted to a reservation in Idaho 1/10th the size of their homeland. There is an article on PBS’s website that gives a brief and well written overview of the war that ensued and its aftermath, tragic though it may be. History remembers Chief Joseph as an “indomitable voice of conscience for the West” and he died in exile never returning to his beloved homeland.

It makes my heart sick when I remember all the good words and the broken promises.   ~Chief Joseph~

From here, we will drive to spend overnights in Boise and Salt Lake City before our three night stay in Moab, Utah. There we will visit the national parks of Arches and Canyonlands. After seeing Zion last year, I am very excited! The weather forecast is not very promising for our visit so stay tuned, I plan to take plenty of pictures wet or dry. Either way, we will be there – hope you will follow, too!