Denali. “The Great One”.  At 20,310 feet it is North America’s tallest mountain and its base-to-summit rise is greater than Mt. Everest’s.  It cloaks itself in clouds that obscures its view to all but 30% of the visitors to this park and of those 30% only 10% see it fully exposed and in all its glory.  Unfortunately, we were not one of the lucky minority to see her and while disappointing, the wonders that the rest of this 6 million acre national park hold made up for it.

Our first views of Denali should have occurred on our drive up from Anchorage and the picture below shows what kind of weather conditions we had that day!

By the time we made it to our campground in Denali, however, the rain had stopped and we had the promise of the rainbow!

We had 3 nights and 2 days in Denali that were action packed.  The first full day of our stay here we enjoyed a Tundra Tour into Denali National Park.  There is one road into the park and it travels 90 miles into its interior but motorists are not allowed past the 16 mile point unless camping in one of the park’s campgrounds further up.  Thus, the parks department and other concessionaires run bus tours that will take you into the vast wilderness beyond.  Our tour took us 62 miles inside before our turnaround point and was a full 8 hour day.  The buses are school bus type and the narrow gravel road that they travel along with some steep terrain thrown in makes it slow going.  But this is really a must for anyone hoping to see expansive views with a bit of wildlife thrown in.

Our weather this day was mostly cloudy with peeks of the sun but the views (except of Denali) did not suffer for it.  The guide on our bus was wonderful – with degrees in environmental science and biology she knew a lot about a lot.  As the road went from taiga forest to alpine tundra she explained how weather, geography, and geology influence the variations in the scenery. 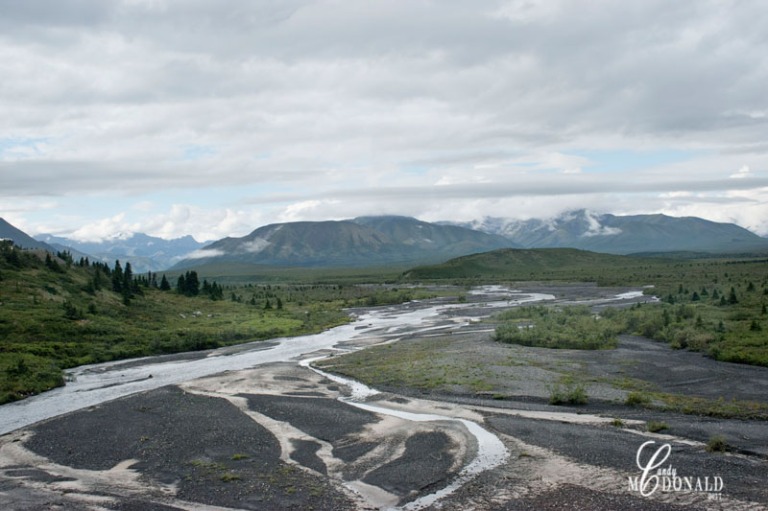 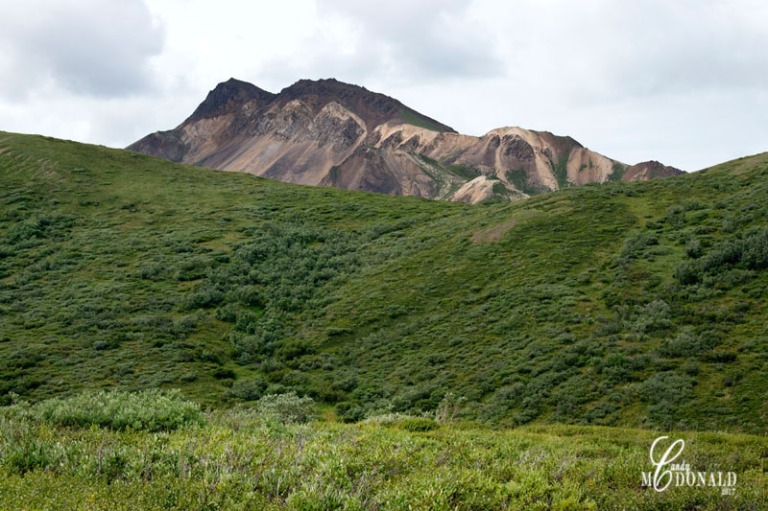 If Denali was showing itself it would be seen dead center of this picture: 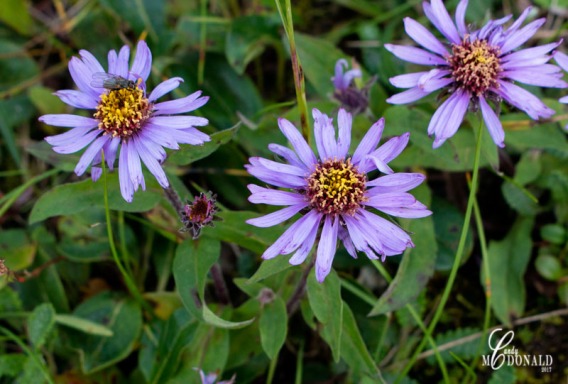 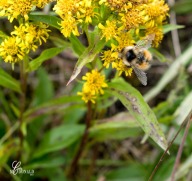 She spoke about the animals that inhabit this beautiful place (37 species of mammals) and how they survive in these harsh environs.  Did you know for instance that when a female bear becomes pregnant during the summer mating season the fertilized egg will not attach itself to the uterine lining until she begins semi-hibernation in the fall?  At that point her body will determine if she has enough fat reserves stored up to nourish her life and her young through the winter. If not, the implant of the fertilized egg will not take place and her body will abort. It’s a process called delayed implantation and something quite fascinating.  Denali also has a frog (the only amphibian that calls this place home) that freezes solid in the winter in a process that uses adrenaline to infuse its blood supply with glucose which then works like an anti-freeze.  How marvelous a creation our God has designed!

We were considered lucky on this tour because we were rewarded with sightings of the “big five” animals – grizzlies, dall sheep, caribou, moose and wolves.  Many of these views were from afar but the caribou were within camera range and the wolves walked right alongside the bus.  Evidently, spotting wolves is a big deal – they are apparently as elusive as the mountain itself.  My best picture of the day though was gifted to be by a marmot who ran right up to me and performed for the camera! 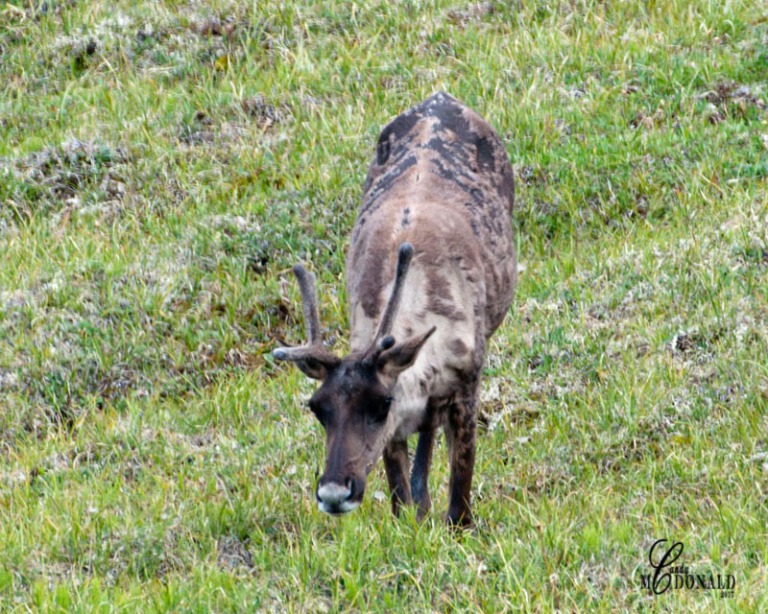 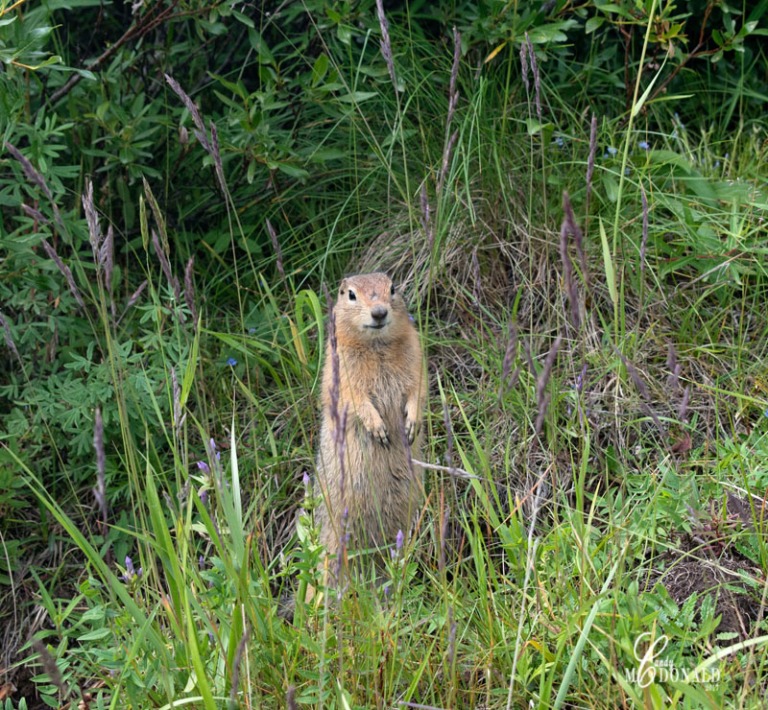 The second day turned bright and beautiful after an early morning shower and at 11:30 we picked up a bus that would take us to our launch site for a scenic raft trip down the Nenana River. Having to don dry suits and boots to protect us from the frigid waters we all looked pretty silly!  It was a lovely day to be on the water and the part of the river we traveled on was only Class I and II rapids so not scary!  Somehow, that did not prevent us from getting pretty wet and so we were thankful for our silly looking dry suits! The water of the Nenana is made up of glacial silt and looks like diluted Portland cement so no peering into any crystal clear depths.  In fact, no fish live in these type of waters and so the bears that live here rely mostly on berries for sustenance – no fat salmon for them!

After the day on the water and our travel meeting that evening we were ready to crawl into bed.  We left for Fairbanks the next morning sad to be leaving this place behind…