After 4 days and 887 miles, we turned off of the Alaska Highway out of Whitehorse, YT to complete the 498 mile Klondike Loop.  This route would take us through the heart of gold country to Dawson City, YT, then across the Top of the World Highway where we would finally reach Alaska to spend our first night back in the states in a place called Chicken. Yes, I said Chicken.  This total loop spanned 5 days and 4 nights and included some of the worst roads you could imagine driving in an RV! Yes, I said worst, as in horrible, treacherous, death defying.

The first leg was a 336 mile drive from Whitehorse to Dawson City.  It was originally a trail between these towns that was used by First Nations people, trappers and eventually those seeking gold during the Klondike Gold Rush in the late 1890’s.  This part of the drive was “asphalt-surfaced”, but had several gravel breaks, frost heaves, potholes and dust which made for a very slow-going day of travel.  We came to fully appreciate the markings alongside of the road to warn of these hazards and essentially slowed down to a crawl when spotting them! 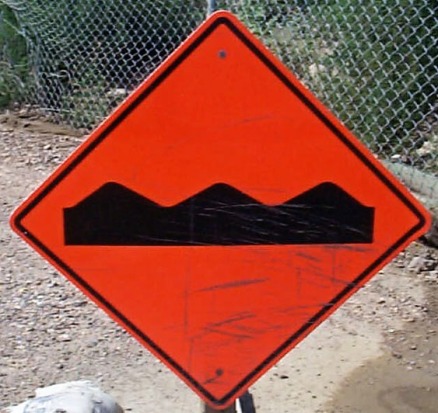 Hold tight when you see these

The area itself was very remote with mostly forested land and a few glimpses of mountains in the distance.  You definitely wanted to make sure you had a full tank of gas before setting out as services were very scarce!  One highlight of this drive was a small lodge called Braeburn known for its “world famous cinnamon buns”.  Our wagonmasters treated everybody in our group with one of these beauties which were approximately 8” in diameter and 4” thick.  They were a sight to behold and yummy to boot!

We arrived late in the afternoon to Dawson City and set up camp.  It was actually hot here and the use of air conditioning was required to keep this aluminum can cool enough to be comfortable!  It was odd to think that we were about as far north as we will be on this journey and yet the temps were equivalent to our home in Greensboro! Of course, there was no humidity, so not quite the same as the Deep South! Nothing on the docket for this day, so caught up on laundry, had dinner and actually hooked up the TV to veg in front of that evening.

On day two in Dawson we were treated with a walking tour of the “city” which is operated by the parks department of Canada.  A costumed tour guide led us back into time when this small town along the banks of the Yukon swelled to a population of over 30,000 in the peak of the gold rush.  Determined to keep this area a testament to its frontier history, the roads are still dirt, the sidewalks are boardwalks, the buildings are restored originals (some better than others) and strict ordinances are in place to keep it that way.  It is one of Canada’s National Historic Sites and enjoys a steady stream of tourists in the summer months and a population of 1,879 of which most stay through the winter!  These are a hardy, live-life-how-I-want, kind of people and trust me one would have to be to live where this town lies! 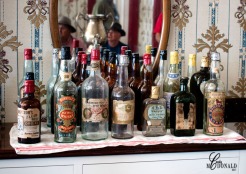 That evening we all went to Diamond Tooth Gertie’s – a gambling hall/casino with a music and dance show straight out of 1898.  Girls doing the can-can and tap dancing to honky-tonk piano entertained a house full of guests.  We enjoyed the show while having dinner and didn’t even try our hand at any of the gaming! 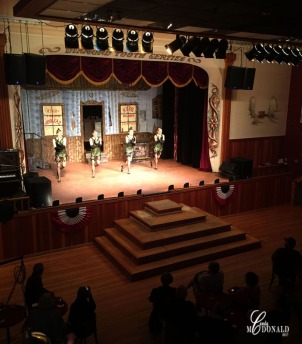 On the way back to the campground we drove up to an overlook point of the city with far reaching views of the Yukon River and the mountains beyond.

The last day in Dawson was a “chill” day.  Caryn and I were the only ones to venture out and that was only to return to the overlook with our cameras this time, to take some pics from this vantage point.  Apart from that little adventure, we spent the day in camp – reading, napping, and contemplating what the next day would bring on the Top of the World Highway…

Let me preface this part of the saga by informing you of my dread from day one in the planning of this trip about driving the 108 mile Top of the World/Taylor Highways in an RV.  I know that many, many, many do, but with warnings in our Alaska Milepost guide that read (and I quote) “This is a narrow, winding road with some steep grades and few guardrails” or “limited passing room, soft shoulders and long drop-offs make this a dangerous stretch” and my most favorite “this is a very dangerous area to be passing and driving big rigs…do NOT pull over too far or the soft shoulder may give way” I was just not convinced this was a good idea.  Six months ago when watching You Tube videos of people driving this thing I mumbled and muttered.  I read blogs, forums, trip advisor – truly I was obsessed!  I made Art promise me that if it was raining (yes, there was a warning about wet weather, too) that we wouldn’t do it – that we would back track almost 700 miles to meet up at the next destination.  And, now, the day was upon us and guess what? Yep, it was drizzly and threatening rain with low clouds shrouding the mountains.  Of course, there was no way we were going to turn around (Art is intimidated by nothing that I know of) but, I did convince him to unhook the Kia and let me drive behind him.  This way, I would not be 8 feet up from the road looking out the window at “long drop-offs” but driving low to the ground smack dab in the middle of the road as far away from the edge as I could be!  The journey itself begins with a short ferry ride across the Yukon River from Dawson City.  And by ferry, I mean something that looks as old as the city itself and can accommodate only a small number of vehicles.  Caryn and I went first in the Kia and waited for Art to make the next trip.  All said it took about an hour between waiting and transport to the other side.

We were caravanning with another couple from our group whose wife was also driving their tow and by 9:30 we were headed off, with Art in the lead.  I wish at this point, I could tell you that all my fears were unfounded.  Unfortunately, I cannot.  This road is mostly dirt with some gravel thrown in. Add potholes and washboard and you’ve got yourself a carnival ride!  And with the low clouds, well I think these pictures speak for the views we saw! 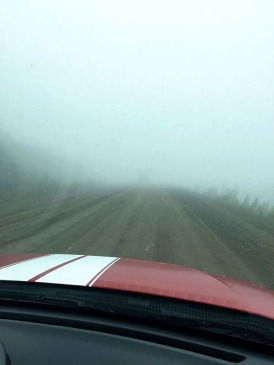 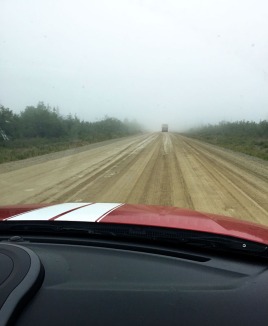 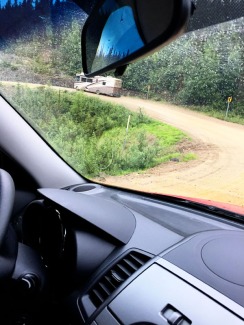 It took us over 4 hours to go the 108 miles and apart from one potty break and border crossing into the US (which, by the way is the northernmost customs office for the US) we did not stop.  I think if the ground had not been muddy when we got to our campsite, we would have (and I include Art, here) all knelt down and kissed it.  I guess it’s not anything we will forget, but not necessarily in a good way – this road was definitely not for RV’s and on this point, Art agrees.

Dirty Vehicles after Top of the World 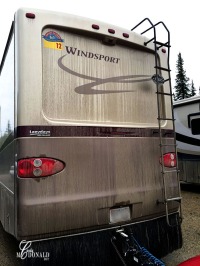 I mentioned earlier that our first night in Alaska was to be spent in Chicken.  This little town also has its history in the gold rush and continues to have active gold mines operating in the area.  It is completely off the grid – no water, sewer, electric, or cell service for its 23 residents (only 2 of which stay for the winter).  The campground did not provide water hook ups, the bathrooms were outhouses and our electric service was generator provided at 20 amps per rig.  The “town” has 3 buildings, a chicken sculpture (made by school children from a town 100’s of miles away), a dredge once used to mine gold and an area to pan gold.  Not quite what I envisioned my first look of Alaska to be. And this will age me, but I kept thinking about the scene in “Butch Cassidy and the Sundance Kid” when they step off the train in Bolivia!  But, in its quirky little way, this wasn’t a bad spot at all.  The campground host was one of the nicest we’ve met – he led us on a tour of the dredge, taught us how to pan for gold and provided us with dessert that evening.  The café and gift shop operated by his daughter was one of the nicest we’ve seen anywhere and we enjoyed breakfast there the day we left.  Interestingly enough, this bizarre little dot on the map will probably be etched in our minds for years to come! 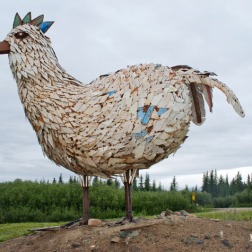 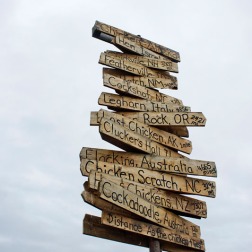 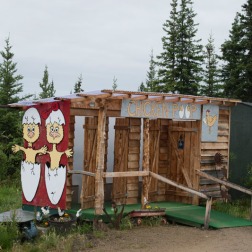 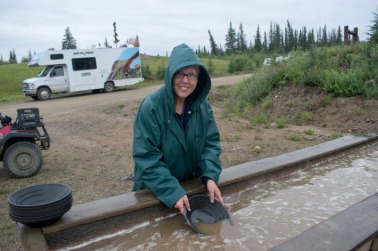 Communal RV wash at campground took care of some of the mud!

8 thoughts on “The Klondike”