As Santa Fe is known to be a lovely and vibrant town, our last day in this area was spent here to celebrate Caryn’s 70th birthday.  Since it was her special day, she was to choose the itinerary and Art and I would cap it off with the celebratory dinner.

Starting the day was a girl’s morning out to visit the Georgia O’Keefe Museum and to do a little shopping on the plaza.  The museum consists of nine galleries showcasing O’Keefe’s work as it intertwined with the story of her life.  A fascinating and well-traveled woman she was considered to be the “Mother of American Modernism”.  According to Wikipedia (evidently, my favorite source for info) “modernist art has a tendency to abstraction, is innovative, aesthetic, futuristic and self-referential”.  It is considered to be “a reflection of American life in the 20th century”.  Her work exemplifies this.  Caryn and I were amused to learn that she was born in Sun Prairie, WI, Art’s and my first home when we lived in that state and she spent time at the University of Virginia in Charlottesville where Caryn lived for several years.  Her move to New Mexico did not occur until she was in early 60’s (though she had traveled there extensively for years prior) and this is where she found inspiration for much of the work she is famous for today.  We enjoyed this visit very much.

Next up was to hunt for the elusive silver and turquoise jewelry that had Caryn’s name on it, so back to the shopping district we strolled.  Amazingly, the hunt was short lived as she found a beautiful cuff bracelet from one of the vendors selling their wares outside the Palace of the Governors.  She was tickled pink to find what her mind had conjured! With that behind us we did some more window shopping, took more pictures and visited the lovely Cathedral Basilica of St. Francis of Assisi.  This church was first established on this site in 1610 by Spanish colonists and the current structure was dedicated in 1887.  Beautiful inside and out. Heading back to the RV for lunch, we spent the afternoon quietly before dinner. 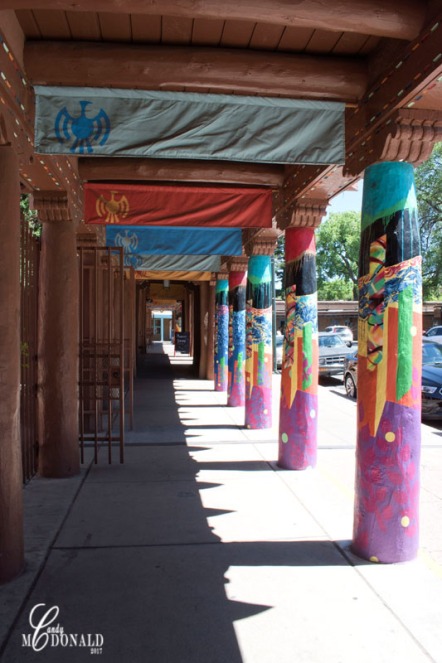 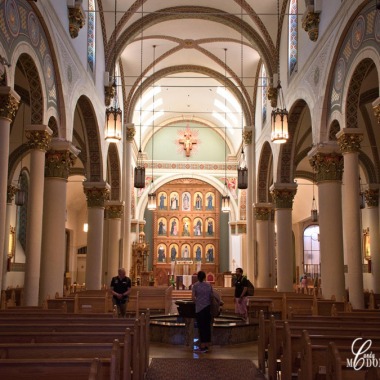 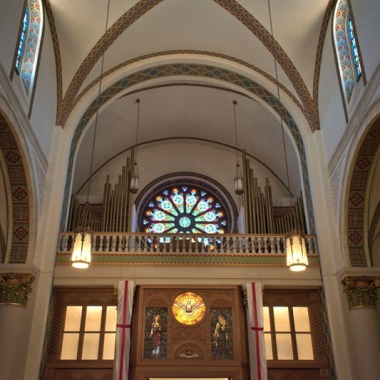 Our dinner destination was La Plazuela – a restaurant located in the LaFonda Hotel along the plaza. Built in 1922 the hotel exudes the spirit of Santa Fe with its adobe façade, tiled roof, skylights and terraces.  The restaurant is known for its interpretation of New Mexican cuisine and did not disappoint.  From the guacamole made tableside, the chili rellenos, fajitas and margaritas, we left fully sated! 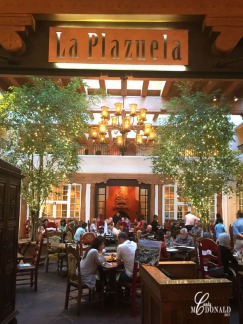 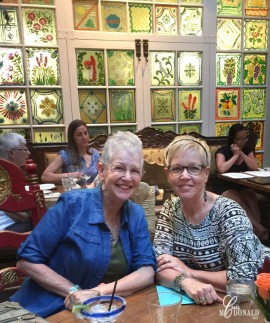 I think when the day was over, Caryn would agree this was a great way to start a new decade upon this earth!